This is a tricky subject to talk about without offending anyone. So let me say that your body is your property and you have the right to decide what goes into it. You also have the right to gain knowledge and know the truth about what goes in your body. So here is the whole case, and points you should consider before starting oral birth control pills, or implants.

Birth control is a common thing nowadays. The birth control pill, which the FDA approved 50 years ago, was the first medicine designed to be taken by people who were not sick.

These pills, devices and implants are hormonal birth control meaning they contain or release synthetic forms of hormones, such as estrogen and progestin (a form of progesterone), which work to prevent pregnancy in various ways.

The problem is that these sex hormones also affect mood and other biological processes. Artificially manipulating biological processes can lead to many unintended consequences in your body, some of them uncomfortable and some quite serious, including altering your mental health. 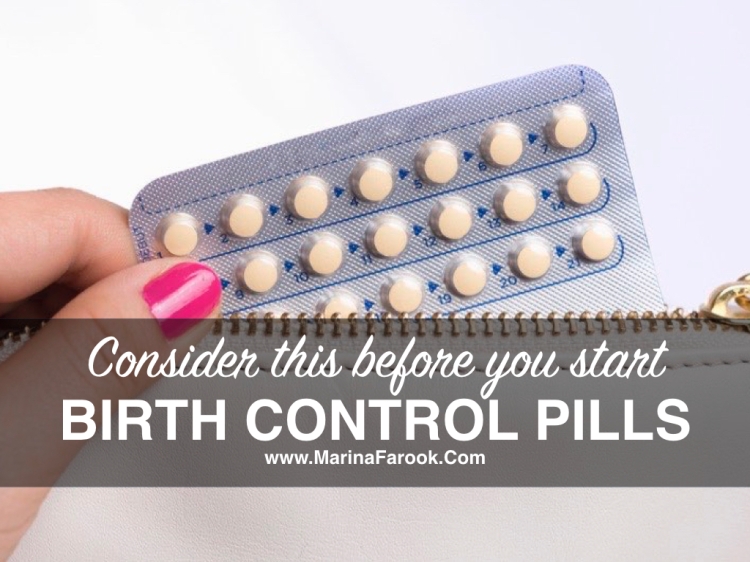 How does it work?

But that’s not all…

Your reproductive system is connected to the rest of your body. This is why altering the natural process lead to other health risks.

Researchers from the University of Copenhagen in Denmark analyzed data from more than 1 million women over a period of 14 years. None of the women, who were between 15 and 34 years of age, had been diagnosed with depression at the start of the study.

However, the analysis showed that women who used hormonal birth control had a 40 percent increased risk of developing depression after six months compared to women who did not. The risk was greatest among adolescents.

The use of hormonal birth control was also associated with subsequent use of antidepressant drugs. Certain types of hormonal contraception had varying risks. Specifically, the use of:

What about other health risks?

According to this report U.S. Centers for Disease Control and Prevention (CDC), 30 percent of women who have used the pill and nearly half of women using other hormonal contraception methods stopped their use due to “dissatisfaction,” which was most often caused by side effects.

Many women have reported a birth control candida link especially when coming off the pill.

If you suspect that you battle from a candida infection, you should visit this site The Yeast Connection Web site. It will help you confirm a diagnosis and give you tools that you need to treat this condition.

Does it makes sense now? Taking synthetic hormones for such a sensitive case is not helping you more than it’s harming you. Is it worth it causing this much stress on your body when there are other safer options?

I don’t say this enough, your body requires nutrients to thrive. Food is the raw fuel our body needs to grow. You should start supplementing safely with proper nutrition or supplements if you don’t meet your macro needs. Birth controls won’t help you here either.

May Contribute to Nutrient Deficiencies

Most people don’t know that in order for the body to metabolize the pill, the liver requires extra amounts of the B-complex vitamins, vitamin C, magnesium and zinc. This means that if a woman has been on the pill for years at a time (as many American women are, starting in their 20s or even late teens), she is creating a situation where nutrient deficiency is more likely. Deficiencies, such as iron deficiency or magnesium deficiency, are some of the primary contributors to most disease (others being factors like diet, genetics, stress and toxicity). If you take the pill, consuming a nutrient-dense, healing diet is key for maintaining gut health and preventing deficiency side effects, like fatigue, indigestion, muscle pains and sleep troubles.

All has been laid in front of you sister, make a healthy choice that will last you a life time.

2 thoughts on “Consider this Before Starting Oral Birth Control Pills”