If you know me then you know how obsessed I am with fellow #StrongSisters who are working hard to spread the #TheStrengthMovement.

Not only do I love her lifestyle which includes strength as a core of her being, but I love her sincere efforts to spread the love and knowledge. She my girl 😉 Read more about her and you will fall in love too! The following is written by Shazia about her personal journey.

“Shaz, how long have you been training for? When did you start?”

I find it rather difficult to answer these questions.

At age 15,  year 10 (9th/10th grade?) my father’s health was fluctuating. He was due for what would be the second operation on his heart.

It Hit Me Hard

I needed to start taking responsibility for my own health. I started taking physical education more seriously. I bravely took up boxing and dance once a week as extra curricula  (I can’t dance though LOL) and hit the gym on weekends. This new little routine kept me sane as I would spend most of my days buried in books studying for exams.

Now, you know how it goes down in typical African/Asian kitchens: hella rice, salt, meat and perhaps a lettuce leaf on the side. Otherwise if veggies do happen to be served with your dinner it would be over cooked and heavily seasoned, taking away from its dietary benefits. I realised that the amount of rice my parents would serve was far too much for just one Shaz, and that my plate certainly wasn’t balanced. So I cut my rice down by 3 quarters and started requesting for more fruits and vegetables. It took my parents a while to understand why I was making these changes, but at the age of 15 I was already thinking about the effect my current diet would have on my 30 year old self.

After leaving secondary school and starting a new 6th form college in 2012,  I continued training casually but there was little opportunity for sports, the work load got the best of me and I eventually lost motivation. My diet also went downhill and it had a negative impact on my emotional health and studies.

In December 2013 after my 17th birthday I decided it was time to start showing my body some love again! I joined a new gym and was determined to get stronger, fitter and happier within my skin. So I started training minimum 4 days a week, used online materials and books to help set up a programme for myself and fix up my diet.

My strength went up, I felt happier about my body and I started to believe that body could do ANYTHING I trained it to do.

I was midway through my Sports Science course and I knew that I wanted to pursue a career in the Fitness industry. I decided to set up my @_shazfit account so that I could connect with others in the fitness scene, in particular other unapologetically STRONG ladies! So that’s exactly what I did- I had met a whole bunch of amazing inspirational ladies, both online and in person. This little fitness community helped keep me motivated and accountable, just like virtual fitness buddies 😄. I met the STRONGgirltakeover and Brixton Street Gym crew was introduced to the awesomeness that is calisthenics, or as the rest of the world calls it “cali-what?”. Calisthenics, the practice of using body weight as resistance. This then became a big part of my regime along side weight training.

Ramadan  (Summer) of 2015 was when I started wearing the hijab, and it was my first time wearing it at the gym to train in. It was a big step and something I had been striving towards for a few years so it was amazing to have finally reached that stage Alhamdulillah.

My first day training with my hijab in the gym was so daunting ! I kept fiddling with my scarf throughout the session and for the first time in years I was actually shy about going into the weight room 🙈 But Alhamdulillah I quickly got over it and I owned every gym session from then on.

People surely WILL stare, because I am a gah damn hijabi sister confidently killing it and that’s not what they expect to see.

That’s not what the media says we mozlamics do. They stare because, before their very eyes, I’m going against their prejudice that muslim women are ball-chained to their kitchens… or whatever. So I’m cool with that 😊

My advice to sisters who are looking to start wearing hijab, or who are contemplating joining the gym: Just frickin’ do it! Your goals, your vision, they are YOURS. Own them and hold yourself accountable to achieving them. If you live your life worrying about what the extra person might be thinking/saying about you then you’ll never get anything done.

Over the years I have become a regular face at the gyms I train at, so Alhamdulillah other regulars who see me training know to respect my time and space. Therefore, if men do try to bother me while I’m training, it’s usually the casual gym goers with no gains. However,  I am incredibly good at acting deaf, dumb and blind when such cases arise- turn my headphones up, look right past/over/through then and continue my set as if they’re Casper the Annoying Ghost. Turning them away politely just takes an unnecessary amount of time and energy. Ain’t nobody got time for that!

One question I get in regards to my training regime and businesses is whether I’m concerned about not finding a muslim man who will support my endeavours. Simple answer to that is no. It’s not a thought that troubles me, rather my concern is finding a man who is about that life but doesn’t feel the need to flaunt it on social media. I always have brothers tell me that they love the fact that I’m a muslim woman who trains AND covers up.

“Masha Allah, so modest, such cover, much haya, very gains 😍.”

Meanwhile these same men are on IG exposing their aura showing off their gym bodies… but you want a sister who- ah nevermind. Sighh….

Since I started covering up in Summer 2015 I had been searching for alternative activewear that would allow me to comply with my new dress code while training. After a few months I found said alternatives to be rather expensive as well as lacking in variety. Eventually, I finally decided to design my own modest clothing range. I wanted to create a brand that allowed women to remain comfortable and covered while being physically active. Modest Activewear that was affordable as well as practical for us sisters. This lead to the official launch of ShazFit Training- Womens Modest Activewear (www.ShazFit.co.uk) in December 2015. Since then I have had sisters from all over the globe benefitting from the clothing range- Alhamdulillah it’s the most heartwarming thing to have humans I have never met supporting my endeavours.

No Barriers  No Excuses

One simple bit of advice I will give sisters looking to achieve their fitness goals: If you are serious about improving your health and fitness in the long run you must be willing to invest your time and/or money. Do not go out there looking for quick fixes or to be spoon fed because you will be thoroughly disappointed. Stay consistent, get your knowledge up and results will surely come InshaAllah! 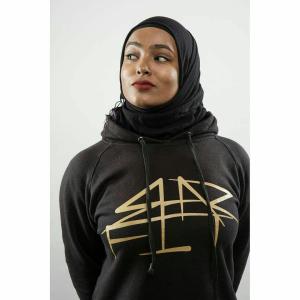 I am a Muslim Woman. Personal Trainer. Founder of ShazFit Training. My aim is to prove to each and every sister that you can get off your butt and achieve your goals with absolutely No Barriers and No Excuses!